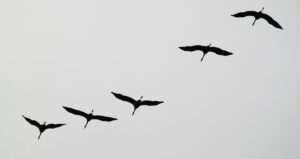 I saw each true believer who has overcome, represented by a small dot. I saw the body of Christ made up of millions and millions of dots. Together the dots came together and form the shape of a woman, hovering over the earth. I recognize her as the bride of Christ, the true church, the remnant which will arise in the end days. Her hand was made up of dots, each representing a true believer. Her body was made up of dots, her legs were made up of dots. In this way, no one part of her body was more important than the other. The head was as important as the legs, as important as the hands, etc.

I saw that each of us, with our unique gifts and our life experiences and our failures was important to form the entire body of Christ. The true believers were washed with the blood of Christ, burned with the Holy Spirit fire, purified and holy. There was no debris or corruption in the bride because she overcome, she was pure and holy.

When the body of believers came together in this way, each person loving God more than himself or herself, putting the interest of God first, the Holy Spirit power was upon the group. I saw from the body of the woman projected out the light of Christ, manifested the ferocious Lion of Judah. The glory and light of God shone out of her. The magnificent image of the Lion of Judah projecting out of the church, startled and shook the world because they have never seen anything quite like it.

I saw the band of demons representing the kingdom of darkness, were startled and afraid when they saw the true church in this way. I realized that they were not afraid of the woman but rather, the manifestation of the Lion of Judah that came to life out of her. The demons recognize the Lion of Judah. He is Jesus Christ, the Lord of heaven and earth. They were instantly afraid and wary because they knew that they were tyrants and usurpers, and Jesus Christ was the rightful king. They were taken aback that God would endow His bride with so much power.

I saw that a mighty and great, gleaming sword, clean and sharp, was put in the hand of bride of Christ. God has given her His sword and entrusted her to wield His authority on earth. I knew that this mighty army of God would accomplish God’s purposes on earth for a season. The demons hung back and stayed a distance from the woman, watching her warily. They did not dare attack or come near her for a while, because they were afraid of the great power of God.